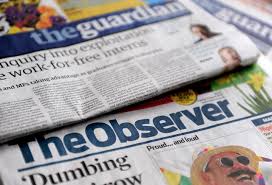 I used to be a big fan of the Guardian as the one paper I would choose to read because of its focus on social issues. I have appeared in the Guardian, written for it and even starred on a advert on its front cover. But the change of government saw a change in direction in how the paper portrays disabled people from promoting independence to dependency.

I strongly believe the paper as spearheaded the creation and development of the fake disabled movement, providing a voice to a new generation of so called disability activists who sole aim is to promote all disabled people as worthless unemployable vulnerable victims of society so the sick can be paid never to work with outright lies, misinformation and dangerous ideas as the paper permits zero real debate of the issues.

The paper has launched a new generation of minor celebs who think they are something as they feel like they are the first disabled person to do something as so-called disabled people. The reality is these rulers of the unaccountable fake movement who hide themselves in social media are the biggest ever danger to real disabled people since Adolf Hitler as their pity based exclusion agenda fuels the eugenics agenda as the pity for the sick and fake relies of real disabled people being portrayed as better off dead.

I am tried to get the paper to commission me to do an counter-argument to this attack on real disabled people by offering a voice of someone who is really disabled/impaired. With excuses the paper talks about timing as its continues to publish offensive misinformation written by the fake disabled movement on a weekly basis.

I know I do have liberal views but I now know I am not a dinner table liberal as I do not allow my emotions and any naivety applaud offensive socialist behaviour. The Guardian made it clear it me its pity for disabled people prevents it from being a platform for proper debate on the issues as it continues to betray real disabled people.